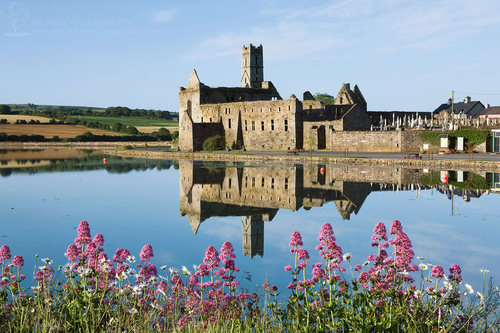 Timoleague gets its name from its original Irish name Tigh Molaga, meaning the Home/House of Molaga. St. Molaga was reputed to have brought beekeeping and honey to Ireland. Honey production is still evident in the area.

Timoleague Abbey is a huge tourist attraction and stands picturesquely at the water's edge at the head of a long sea inlet. In its day it was one of the largest and most important of the religious houses in Ireland.

Timoleague Friary or Abbey was founded by the Franciscan order in 1240. The abbey was built on the site of a monastic settlement founded by Saint Molaga in the 6th century. The abbey was extended by Donal Glas McCarthy in 1312, and by Irish and Norman patrons in the 16th century. The monks were dispersed by the Reformation, but returned in 1604. In 1612, the abbey was sacked by English soldiers who also smashed all of the stained glass windows, but much of the significant architecture remains. The friars remained in the abbey until 1629 and held priceless artefacts such as the important MSS, known as the Book of Lismore. It is said that the monks did a goodly trade in smuggled Spanish wine!

Thy lonesome walls are now almost forgot,
Exposed to air to moulder and to rot,
Where music once in solemn notes did roll,
Now the dull mansion of the screaming owl.

An Ivy wreath thy summit binds secure,
The pungent nettles on thy humid floor,
The fox shrill barking in thy ancient Hall,
And weasels purring in thy hallowed wall.

Here the early lark his wonted Matin sung,
And clergy prayed with never ceasing tongue,
No voice is heard to model Nature's laws,
But the loud chatter of the nestling daws.

Extract from: The Melancholy Man's Meditations on seeing the Abbey of Timoleague in 1813 translated from the Irish of Seán Ó Coileáin.

Today the remains of the abbey strike an imposing vista upon entry to the village, especially at night.

In Abbeymahon, on the road to Courtmacsherry is the ruin of a Cistercian Abbey - Abbeymahon Abbey. The abbey was founded in 1172 by Dermot MacCormac MacCarthy, King of Desmond. The site was originally at Aghamanister and was colonized with a group of monks from Baltinglass. Almost a century lapsed before the monks decided to move to a new site. The monks moved to Abbeymahon in 1278 when Diarmuit MacCarthaig, son of Domnall Cairbreach, was buried in the new monastery.

The Church of Ireland church is also noteworthy in the village of Timoleague. The interior is completely decorated in mosaic work carried out and paid for mainly by the then Maharajah of Gwalior of India about 1920 in memory of his doctor, Dr Crofts, who came from Timoleague. The church itself dates from 1811.

The village was once connected to the West Cork Railway, by a branch onto the Clonakilty railway line, opened by the Ballinascarthy & Timoleague Junction Light Railway in 1890. The Timoleague & Courtmacsherry Extension Light Railway later extended this to nearby Courtmacsherry in 1891 and its pier in 1892. Regular passenger traffic ceased in 1947 with post-war fuel shortages, and the line was closed completely by CIÉ in 1961. Timoleague railway station opened on 20 December 1890, closed for passenger traffic on 24 February 1947 and finally closed altogether on 1 April 1961.

Timoleague has a vibrant community spirit as can be seen by the great volunteer work carried out by locals in keeping the area clean and tidy, running the annual harvest festival or completing new projects to aid the locals (new playground, sports complex, pontoon or general aesthetically pleasing maintenance work around the village to name a few).