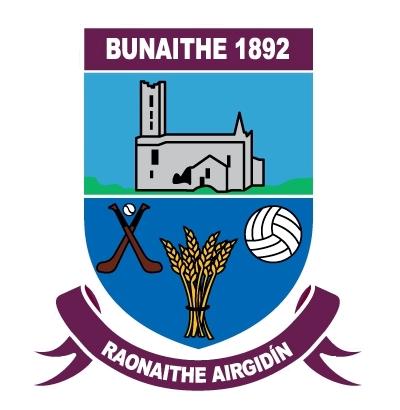 The Argideen Rangers club crest draws on a number of local influences in it's design. The hurleys, sliothars and football are self explanatory, as is the year the club was founded - 1892.

Tigh Molaga of course is the Irish for Timoleague and translates as the "home or house of Molaga". Legend has it that St. Molaga placed a sheaf of barley into the River Argideen and decided to follow it and settle where it stopped. Of course it flowed all the way to the mouth of the river, hence he decided to settle in the estuary village of Timoleague.

The area has long been an excellent agricultural hinterland and so the sheaf of barley is also particularily apt in that sence. It is also no coincidence that there is an Annual Harvest Festival held in the village every August.

The base of the crest carries a scroll with our Irish club name, Raonaithe Airgidín. Of course taking centre stage on the crest is the famed Timoleague Abbey.