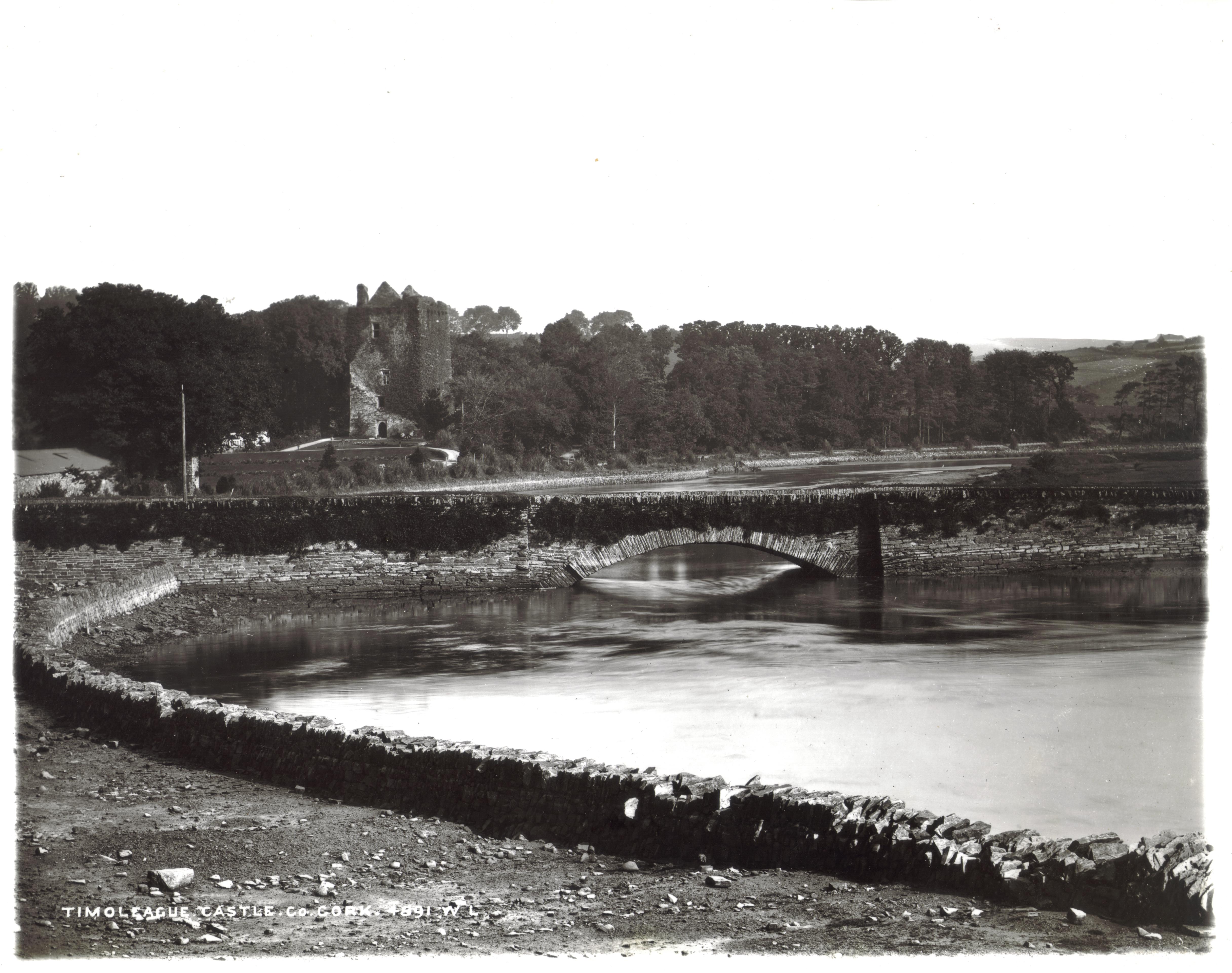 From time to time the date of the first game played by a Timoleague team is often remarked upon. Reports in The Southern Star and The Skibbereen Eagle in their editions of the 5th of March 1892 have coverage of a game between Timoleague and Bandon which was played at Timoleague the Sunday previous so we can deduce from this that the game was played on the last Sunday of February. The writer remarks that there was only one affiliated club representing West-Cork the previous year, that being Clonakilty. However in 1892, the number had increased to three with the newly affiliated Bandon Shamrocks and Timoleague joining Clonakilty in the County Championship.

The County Board when they were making the draws for the football championship decided that the West-Cork teams should be drawn against each other in the championship. Bandon were to play Clonakilty and Timoleague were given a bye. As Bandon and Timoleague were new to the game, it was decided that they would play a friendly game first and this game is the one that was reported on in the papers on the 5th of March. The venue was Timoleague and The Cork and Bandon Railway Company brought the Bandon team to Timoleague to play the game. The 11.30am. train brought some 115 passengers who were “warmly received on arrival and friendship and good feeling were the order of the day”.

The game was a disappointment however because of a gale force North-Easterly wind that blew like a hurricane during the fixture. The venue didn’t help matters as it was up on the top of Ardmore overlooking Timoleague village. The report states that several times the ball was blown back from the goalkeeper’s kick out without ever being touched by an outfield player.

The good thing was that Timoleague won the toss and wisely played with the hurricane. Good thinking by our former greats. Timoleague had a virtual monopoly of the play and Timoleague captain Wm. (Bill) Hazel scored a great goal and M. Kelly followed with a point. Playing a “knacy” game Timoleague continued to score point after point. The halftime score was 1-7 to 0-0 with Hazel, Kelly and M.Foley being most conspicuous on the Timoleague side.

It was backs to the wall stuff in the second half. Bandon kicked two quick points and were clawing their way back. Timoleague sensing that they were in danger slowed down the play with the goalkeeper kicking the ball out to the corners rather than out the middle as the Bandon keeper had done in the opening half. Bandon objected strongly to this tactic but their complaining was of no avail. Despite the best efforts of the Bandon players, the St. Molaga’s succeeded in keeping the ball in their favourite corner and almost out of play. Bandon did score four more points in that half but Timoleague held out for a famous winning start. In those days five points was equal to a goal and the teams were seventeen a-side. The final score was Timoleague 2-2 to Bandon’s 1-1.

Mr. John Burke, station master and club secretary acted as field umpire for Timoleague and Mr. J. Daly as goal umpire. Mr. David O’Brien, President of the Shamrock club was the mutually chosen referee and Mr. G. Wycherley of Clonakilty gave the benefit of his wide experience in Gaelic matters in the general management of the match and his services were much appreciated.

Not a bad day’s work by Timoleague when you consider that the referee was from Bandon and it was the club's first match together.

Looking at the team line up some of the names are familiar- as they say, briseann an dúchas.

The local St. Molaga team fresh from their opening match success against Bandon in a challenge game played at Timoleague, entered two teams in the Clonakilty Gaelic Tournament. The Timoleague 1st team were drawn against the Clonakilty 1st team – a most difficult assignment as Clonakilty were the top team in West-Cork at the time. The game was played on Sunday March 20th 1892 with a 2.30pm throw in. The game got under way at 3.00pm (some things about the G.A.A. never change) Timoleague won the toss but I’m afraid that was all they won on the day. The field was level and there was very little wind. After a close first half Clonakilty were ahead one point to nil. Clonakilty continued to dominate in the second half but the Timoleague side made them fight hard for scores. The final score was in favour of Clonakilty - three points to no score. This was a great result considering the Timoleague were mere novices compared to their opponents.

Mr. C. Cahalane of Rosscarbery was the referee.

On Sunday April 3rd the Clonakilty Football Tournament continued and the newly formed club at Timoleague was hooked on Gaelic football. There was such an interest that the club had to enter a second team to cater for the large number of players eager to show their prowess. Timoleague’s second team played Rosscarbery but the report stated that there wasn’t much interest in the game because of its one sidedness. This was Rosscarbery’s first team and the club was well established in comparison to Timoleague, hence the imbalance. During the opening half, “Ross showed their superiority and had matters much their own way”. Timoleague were very much defensive in this half and were down 2 goals and 5 points to nil at half time.

In the second half they fared no better. They did get possession of the “leather” more often and we are told that they got more aggressive, however the report states “they never at any time looked liked scoring” They surely were praying to hear the final whistle long before it sounded. The final score was 4 goals and 4 points to nil.

The field umpire was J. Burke. The goal umpires were J. Daly and J. Tobin.

The referee was G. Wycherley of Clonakilty.

Some of the names listed on this second team would seem to be similar to players who were involved with the first team in the earlier game against Clonakilty. Other players are mentioned for the first time. Interesting!

Clonakilty were well established as a club, whereas Timoleague were only finding their feet in this their first year affiliated. Such was the interest in the game, especially in Clonakilty, that a special train was laid on to bring the supporters and players to the game and we are told that the railway officials had great difficulty in accommodating the large numbers. A report in The Southern Star states that “availing of the fine weather and the prospect of witnessing a good contest, a very large number of spectators, including a good many of the fair sex were assembled on the field of play”.

The field was high up in Ardmore and was given by local landlord, Mr. R. Travers J.P. The game itself was fairly one sided but Timoleague made the Clonakilty men earn any score that they got. Try as they might ,they were unable to match the football skill of the men from the “brewery town”. The final score was Clonakilty 8 points or 1 goal and 3 points to no score for Timoleague.

This was in essence the West-Cork final as no other teams were affiliated to the County Board.

Field umpire was J. Burke and goal umpires were J.Daly and W. Hazel.

Bill (Wm.) Hazel who was the captain of the team for all of the other games was an umpire on this occasion – possibly he may have been injured.

The Timoleague Tournament of 1892

A notice on The Southern Star informing readers that The Timoleague St. Molaga’s G.A.A. club was holding a football tournament open to the county appeared in the issue of the 2nd of July 1892. It was to begin on Sunday July 24th for a valuable set of silver medals for the winning team of a club's first team and silver medals also for the winners of the section for the second teams of clubs entered. Entry fee was a half crown.

The opening day of the tournament was excellent weather wise and “never since the construction of the Timoleague line did such a heavily human-freighted train travel over the rails.” The train that left Bandon was packed “even the guard’s van was invaded”. At Ballinascarthy, the numbers were augmented and when the train steamed into Timoleague, the people on the platform were evidently astonished at the crowd of excursionists. The toilsome ascent to the field was amply compensated for by the view which opened before the spectators from its summit. “To omit to mention that many ladies were in attendance or forget to add that their presence lent an additional attraction to the scene, would be an unpardonable sin.” The organisers were ahead of their time, it would seem with regard to marketing. It doesn’t say if the ladies were admitted free of charge to the game!

The opening game started at 3.00pm with the first teams of Ardfield and Timoleague in opposition. A second game between Bandon and Bealad was not played as Bealad were not present. St. Patrick’s (Bandon) Brass Band was in attendance to add to the festive occasion.

Ardfield won the toss and elected to play down with the incline and they also had the aid of a slight breeze. The men from “The Mountain” used their advantage to the full and scored two first half points. Timoleague defended well but failed to register a score. On the turn over Timoleague dominated and scored a point to narrow the gap. The report states “that the play was pretty lively all around, but disputes were avoided and this was remarkable such was the keenness of the play. Two players had to leave the field of play due to a collision they being Foley of Timoleague and Cullinane of Ardfield. Timoleague scored a second point late in the game to equalise and all agreed that a draw was a satisfactory outcome to the affair.

Mr. Michael O’Keeffe of the Cork County Board acted as referee. The fact that an official travelled from Cork to referee the game would indicate that it was an important event in the eyes of the County Board.