Cork into All Ireland final 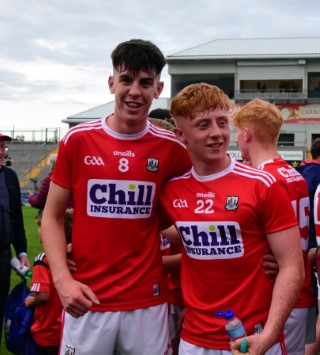 The old adage of "a rising tide lifts all boats" is certainly holding true where Cork football is concerned at the moment. The senior team qualified for the Super 8's, the U20's played a great brand of football in claiming the All Ireland and now the minor team have qualified for an All- Ireland final on September 1st. One would not have considered this a possibility when they suffered a heavy defeat to Kerry last May, however they will line up to play Galway in the decider in three weeks. Central to Cork's 4-12 to 1-13 semi- final win against Mayo last Saturday were two Ibane Gaels players. Jack Lawton once again dominated the middle of the field. It's no coincidence that his return to the team after an injury earlier in the year has coincided with an upturn in playing fortunes. He kept tabs on his dangerous direct opponent and showed maturity beyond his years to constantly surge forward and link well. His Ibane teammate, Ryan O' Donovan, continued his scoring form with two points off the bench and will give the selection committee many headaches over the next few weeks.