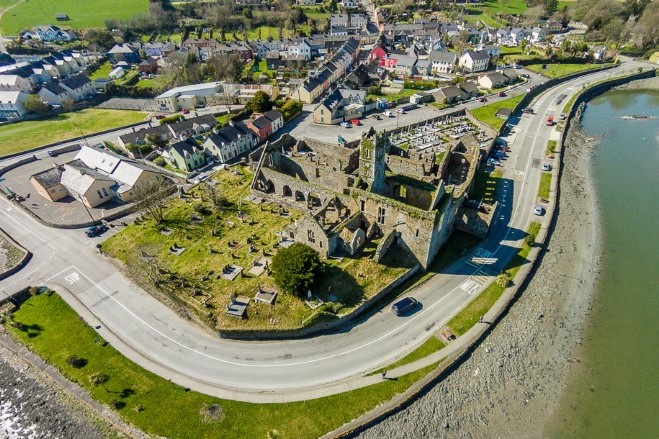 The Ahawadda ambush was remembered on Sunday last May 10th at the ambush site at 3.15pm. A small group of people with a keen interest in local history gathered at the place where the three RIC members were killed exactly 100 years ago.

A special week-end had been planned to remember all those who lost their lives during this turbulent period in Irish history. Alas, that has had to take a back seat under present circumstances. Hopefully it can be rescheduled at a later date. A simple but dignified ceremony took place at the ambush site. Local woman, Mrs. Margaret O’Donovan who lives at Ahawadda Cross, the nearest residence to the site, layed a bouquet of flowers and Fr. Patrick Hickey PP Timoleague led a decade of the rosary for the souls of the dead police officers. Those present kept a suitable distance apart as per the guidelines. Diarmuid Kingston, who has done much research into the history of the RIC in the area contained in his much- acclaimed book “Beleaguered: A History of the RIC in West-Cork in the War of Independence” spoke, giving a brief background into the lead up to the ambush. Tim Crowley of The Michael Collins Centre at Castleview together with his brother Tom have made a short film to mark the ambush which is freely available on youtube https://www.youtube.com/watch?v=112Cmi44p90   It is also available if one searches “aghawadda ambush” (note the spelling).

Two new signposts outlining four loop walks in Timoleague have been put in place during the past week. The specially commissioned signs are the work of Clonakilty man Tomas Tuipear. Two of the walks are in Abbeymahon and are called the Abbeymahon Loop Walks and two are near the Argideen river and called The Argideen Loop Walks.

The Abbeymahon Loop Walk is colour coded Blue. You begin at the signage area under the Abbey. You then proceed on to the Courtmacsherry Bridge where a way marker showing an arrow and walking man will direct you on to the Courtmacsherry Road. You follow the blue signage at the entrance to the Lagoon and stay on the public road. You are then directed to take a right turn up the Abbeymahon Road. At the first cross-roads the newly erected hand painted finger sign post offers the walker a choice of a short or a long route.

The short route (marked 3.5km. back to base) will direct the walker to take a left turn and proceed following the signage before making the decent down the lane to join the main Timoleague- Courtmacsherry Road. You then take a left turn, making your way back to Timoleague along the Railway Walkway. The total distance of this walk from start to finish is 4.8km.

The long route (marked 4.9km. back to base) will direct the walker to continue on straight until one comes to the next cross-road which is called Abbeymahon Cross Roads. You take a left here as directed and continue on straight following the signage.  You then proceed down to the main Courtmacsherry-Timoleague Road. You will be directed to turn left and you can walk back to Timoleague on the Railway Walkway. The total distance of this walk is 6.2km. You can also of course take a right turn and make your way to Courtmacsherry and explore this beautiful coastal village.

The second two loop walks are called The Argideen Loop Walks and are coloured coded Red. Again, the beginning will be at the signage area under the Abbey. One will then proceed to the junction at the Bandon Bridge with the old telephone box on your left. You will be directed to take a left here and walk to The Canon Fleming Hall where you take a right and you walk up The Wood Road and you continue on for quite some distance passing The Argideen Lawn Vale and Croquet Club on the left until you come to Inchybridge. You keep left and continue on to David Deasy’s Garage still keeping left. You take a right at the fork on the road as directed by the red signs. You continue on and you take a sharp left up the hill until you come to a cross-road. Here there is are newly erected finger sign posts offering the walker a choice of a short route or a long route.

The short route (marked 2.3km. back to base) will direct the walker to continue on straight through the cross before beginning the climb up to the top of Ardmore Hill. You then start the decent down the hill towards the village. The total distance of this walk is 6.5km.

The long route (marked 5.6km. back to base) will direct the walker to take a right at the finger sign post and proceed for quite a distance until one comes to the cross known as “The Gub”. At “The Gub” you take a left and continue on straight following the red waymarkers until you reach Ardmore Cross with the concrete water reservoir in front of you. You turn right and make your way down the hill until you reach the village. The total distance of this walk is 9.8km.

One cannot get lost as there are arrows and walking men directing the walker on the routes. The signage is colour coded Blue for Abbeymahon and Red for Argideen. Both loop walks with their two sub-loops are confined in the main to the quieter roads and avoid the main busy roads around the village for safety reasons.

Enjoy your walk and stay safe. This project is a Molaga Tidy Towns Association initiative and compliments the Seven Heads Walk and will also link in with the planned Greenway Walk linking Ballinascarthy and Courtmacsherry.