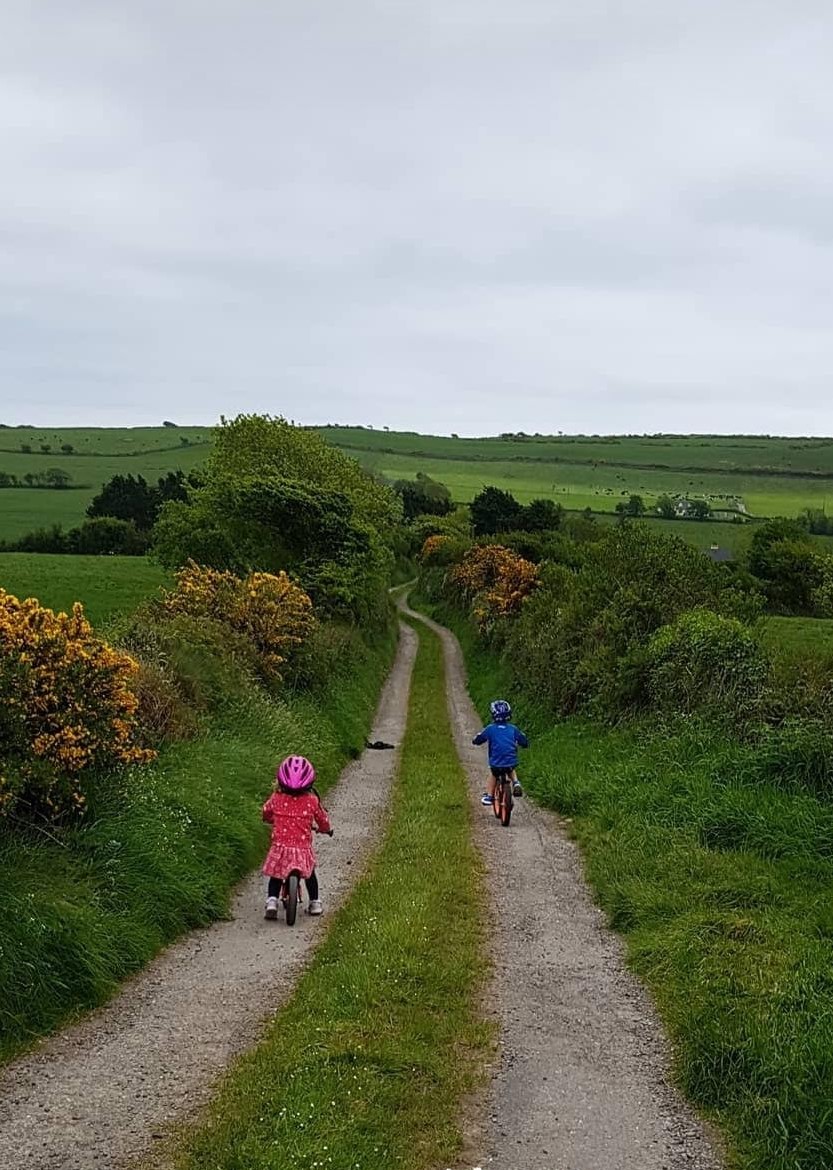 Last weekend Argideen Rangers GAA club organised a community fundraiser where participants were invited to "Clock up the Kilometres". From early Friday morning to late Sunday evening, locals endeavoured to get moving by whatever means possible and to share the results on social media. The weather was fantastic all weekend as people traversed the spectacular landscape of our beautiful area. All ages and abilities took to the roads by foot, bike, roller blade, scooter or buggy and some even swam in the wild Atlantic! As the weekend progressed, more and more ex pats domiciled around the world joined in with entries from all over Ireland, London and Australia. It was heartening to see familiar faces in good health out and about, united in the common goal of helping three worthy causes; Clonakilty Community Hospital, Pieta House and Timoleague Parish Church. At the time of going to press, €13,308 has been collected.

Over the weekend, some families clocked up enormous tallies such as Finbarr Walsh and family (402km), Niall Ryan and family (373km) and Ross Twomey and family (307km). To put these distances in context, it's just over 400km from Timoleague to Ballyshannon in Co. Donegal! The total distance clocked up by the community at the time of going to press was 5,747km - the equivalent of travelling from Cork to Chicago! Final figures will be published next week.

Argideen Rangers would like to sincerely thank everyone who made a massive effort and were extremely generous towards these worthy causes. The whole event was expertly co-ordinated by Pat Burke and Sheila McCarthy who managed to harness the great spirit that has always existed in our area, a dynamism and a “flaithiulacht”. which is synonymous with the monastic parish. Honourable mention also of Michael Heaney who added a touch of musical magic to publicise the event on social media.

Clogagh and Timoleague churches have re-opened for personal prayer as and from Monday last. This will operate on a phased basis as per the national guidelines. During the week from Monday to Saturday the churches will be open in the afternoons from 3pm to 6pm. On Sunday the opening times will be from 10am to 1pm.

A one- way system will be in operation with entrance through the main door and exit at the side. Worshipers will be guided by signs and tapes. Physical distancing of 2 metres is to be observed and the maximum in the church at any one time will be capped at 10. Hand sanitisers will be available at both the entrance and the exit. Two stewards will be in attendance at both churches to welcome worshipers and answer any queries that may need clarification.

The parish pastoral council is appealing for volunteers to act as stewards so that this system may run as smoothly as possible. If you feel that you could offer an hour of your time  to act as a steward please feel free to contact any member of the pastoral council. You may also, if you prefer, contact one of the following members of the agenda committee: Fr. Hickey PP (086)8334562: Fachtna Hennesssy (086)0633406; Mary Collins (086)3610634 or Dominic Mosley (086)4099681.

The recent death of Mrs. Mary Whooley, the oldest resident of Timoleague village was an occasion of much sadness both to her family and to the wider community of the area. Mary could be described as a child of the new Ireland. She was born on May 1st. 1924 and both her parents, together with her uncles, Willie and Mark and aunt Lizzie Harte were highly involved in the War of Independence. Her father Dan Harte was Commandant of the Clonakilty Battalion of the West-Cork Brigade while her mother Madge was captain of Cumann na mBan in Timoleague. She grew up with the state and saw many changes for the better both nationally and locally during her 95 years in Timoleague.

Mary was the eldest of 10 and, as was quite common in big families at that time, she was reared by her grandparents in Timoleague. As a child she was particularly close to her grandfather, who was one of the founding members of the Timoleague GAA club in 1892. It was he who awakened her great interest in sport which she maintained throughout her long life. An ardent supporter of Argideen Rangers in all their activities, she attended games up to her mid 80’s and always looked forward to a detailed account of any Argideen and Ibane game she missed in recent years.

She had a deep sense of place and was so proud of her roots in Timoleague which go back to famine times, and its wonderful people. She attended Timoleague GNS and she, with her classmates in 6th class in 1937, contributed to the National Schools Folklore Collection which is now house in UCD. During her lifetime she immersed herself in much of the social activities in the village over the years, The Legion of Mary, The ICA and The Ladies Club to mention just a few. No fundraising event was complete without she supplying some baking, in particular her fruit cakes which were so much sought after. She loved to participate in quizzes and was a member of many successful ICA teams, which also included the late Mrs. Eily Collins. An ardent supporter of Daffodil Day, she supplied flowers to both Clonakilty and Timoleague collections for many years.

Mary had a wonderful sense of recall and vividly described growing up in Timoleague in the 20’s and 30’s. She often talked of the excitement in the area when a plane landed in Ardmore around 1930 and she always liked to recall stories about the many shops and businesses in the village at that time. One of the highlights of her youth was the visit of Tadhgo Crowley and the other Clonakilty/Cork footballers with the Sam Maguire Cup in 1945. She was equally delighted to welcome her cousin Mark Foley with the Liam Mc Carthy Cup in 1990. She recalled the construction of the tower in the Catholic Church in 1931 and the installation of the Harry Clarke windows around the same time.

She was a “giver”. She put her family before herself at all times. She was totally devoted to her late husband Diarmuid, long serving principal of Timoleague National School. She gave the greatest of care to her Auntie Jo. Many of the older generation will still remember her pounding up and down Mill Street a couple of times a day between her home and Auntie Jo’s pub and shop.

Mary had a deep sense of faith all her life with a particular devotion to Our Lady and the Sacred Heart. Her faith was her rock and it brought her through many difficult times. She loved visiting the church in Timoleague and lit many a candle at both side altars for her children, grandchildren, great grandchildren, relatives, neighbours and friends. When she was no longer able to attend Sunday mass, she was quite happy to participate from the comfort of her home when Mass from Kinsale or St. Augustine’s was on the internet. We are all now doing the same during the present restrictions. It could be said that she was a woman before her time!

At the conclusion of her funeral mass, pre covid, her son Donal spoke on behalf of the family. He thanked the people of Timoleague and surrounding areas for the support, love and generosity shown towards his mother and the extended Whooley family. He also mentioned all the medical staff and the clergy who tended to her physical and spiritual needs and made her so comfortable during her final days. He didn’t forget Helen and Carmel who were so devoted to her during her illness.

How appropriate it was that as her remains left the church, the words of “The Flowers of the May” filled the air. Her last journey was “around the mill” before she took her final resting place in The Abbey beside Diarmuid. Ar dheis lamh De go raibh a hanam.