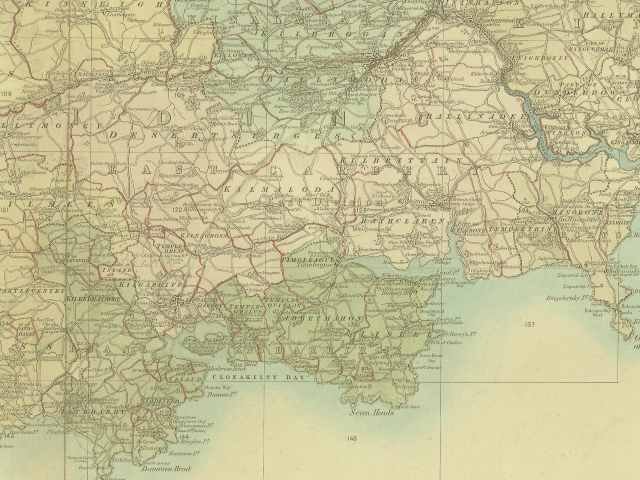 The book was discovered hidden behind a blocked up wall at Lismore Castle in 1814 by workmen carrying out repairs to the building. In a hidden chamber behind the wall they discovered folios of the manuscript loosely bound together in a box. Many were in poor condition due to dampness and some had been gnawed by rats and mice. Colonel Currey, the Duke of Devonshire’s agent is primarily credited with rescuing it from destruction. The first forty folios are missing. It is thought that some of the workmen carried off several loose leaves and even whole staves of the book after they came across it.

The following year the Colonel gave the folios that survived to Donncha O’Floinn of Shandon Street, Cork. He was a member of a group of writers and scholars in the city who had an interest in old manuscripts. He was also a part time printer and as the name suggests, had a passionate interest in the Irish language. He is credited with giving it the title The Book of Lismore. However, O’Floinn was overcome with enthusiasm and he added to the script and decorated parts of it especially the ornate capital letters at the beginning of chapters. He also added some verses of Irish poetry that he himself had written.

Micheal Og O’Longain, a Cork writer and poet copied some of the manuscript in O’Floinn’s house. He like most poets and writers at the time had little money and he sought patronage for this work. Bishop Murphy of Cork was enthusiastic and offered assistance. It remained in Cork until 1820. O’Floinn, in his wisdom decided to have it bound before its return to Lismore. Back in Lismore it was discovered that some 66 folios were still in Cork. In 1824 Colonel Currey gave the manuscript to Edward O’Reilly, a lexicographer to verify its age and content. In 1839 it was given to The Royal Irish Academy and Eugene O’Curry transcribed parts of it for the library of the academy. O’Curry discovered that there were folios missing since its time in Cork and he was not at all pleased. He launched an investigation and was eager to recover the lost folios. O’Floinn died in 1830 and the “missing” folios were left to his son, who sold them in 1853. Despite the best efforts of the Royal Irish Academy to acquire them, they were bought by Thomas Hewitt of Summerhill for £50. Hewitt believed that he had the complete book and he had it bound. In 1857 John Windele reading a journal on rare books discovered that Hewitt had this in his possession. He recognised that it was the missing part of the book. He was instrumental in its return in 1866 to The Duke of Devonshire at Lismore. It was unbound and reunited with the rest of the book.

Seosamh O’Longain, son of the already mentioned Micheal Og, examined the manuscript in Lismore between 1858-’59 and he transcribed the remainder of it for The Royal Irish Academy between 1864-’66. It was later sent to the British Museum where it came under the guardianship of Whitley Stokes. He catalogued it in its entirety for the first time. While there several parts of it were transcribed and translated. In 1890 he published The Lives of the Saints from the book. This publication is still used by scholars today. Standish Hayes-O’Grady published pioneering texts and translations of several works from the manuscript in 1892. It was back in Chatsworth in Derbyshire, the Duke of Devonshire’s estate in England by 1927. The Irish Manuscripts Commission was set up in 1928 and its aim was to facsimile many of the old manuscripts that survived and among them was The Book of Lismore. Next is the advent of World War 11 and the work of Blathin – Robin Flower.

On Saturday next, November 16th. the following area will be visited and meals delivered: Timoleague village, Clogagh, Burrane, Kilshinehan and Maryborough.

As already stated, this most kind act of generosity by Gavin and Michelle of Monk’s Lane is a wonderful act of community spirit at this time. It is hoped that Monk’s Lane and all other restaurants and bars will be in a position to re-open for the Christmas period now that the numbers testing positive are decreasing.